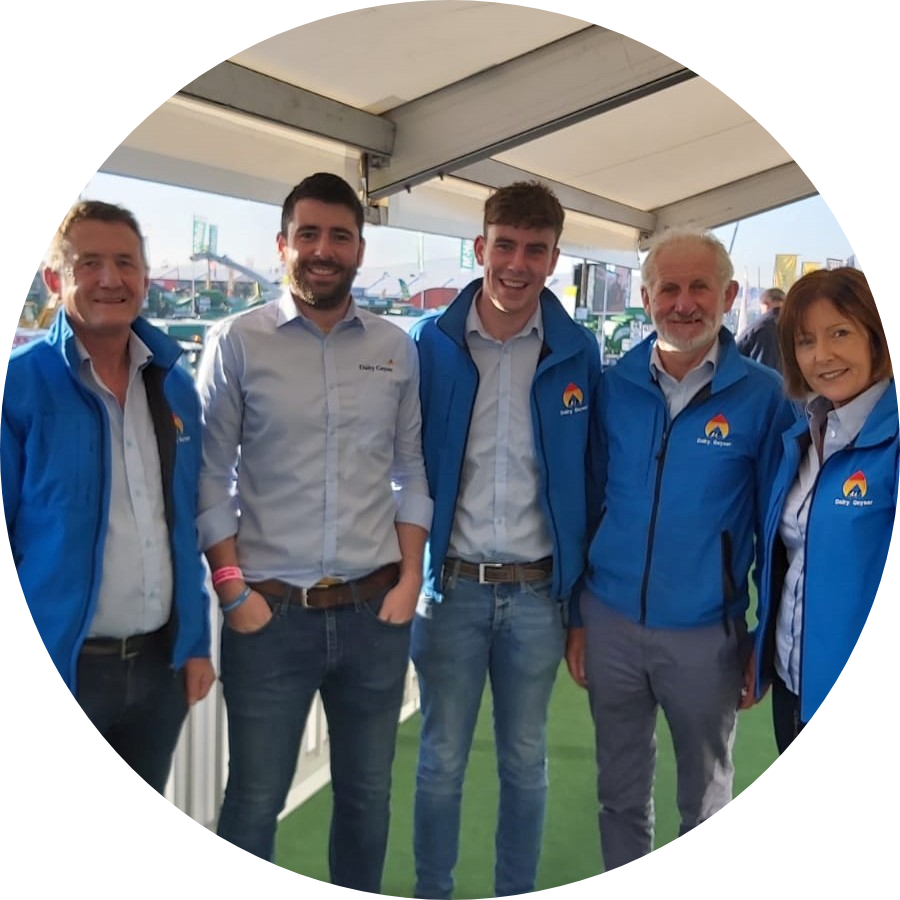 The idea for Dairy Geyser came about when a dairy farmer approached one of the founders, Martin Deady, at his pressure washing business, indicating that the traditional batch electrical water heating system was no longer viable for current dairy sterilisation demands. It could not provide the large quantity of hot water at constant high temperature now needed. This problem was compounded by the imminent banning of chlorine as the active ingredient in dairy detergents from the hygiene process.

In 2017, the Irish manufactured Dairy Geyser, designed by Irish Dairy experts over a number of years, was commercially launched at the National Ploughing Championships. It was immediately crowned the 2017 overall product of the year at the National Dairy show. Since then, hundreds have been sold onto Irish dairy farms and it is stocked by all major co-ops.

Since the initial success, Dairy Geyser has continued its innovation by developing three separate models and introducing the hybrid energy fusion system in line with its aim of increasing savings and decreasing emissions. Future plans include powering the machine on methane gas produced on farms, totally eliminating emissions.

Martin Deady is from Cork. He worked in the steel fabrication industry before becoming a Karcher agent for Ireland. He is the inventor and current managing director of Dairy Geyser.

Syl is from a farming background in Kilkenny qualified as MAgrSc in U.C.D. Subsequently worked for Glanbia as manager before completing a period of self-employment in the hospitality industry.

Rose started out working in the retail sector, becoming self-employed in her early 20’s. She later moved into the community sector, working as both a coordinator and facilitator. Rose has been involved with the company from its inception and came on board, in a full time capacity in 2019

This website uses cookies to improve your experience while you navigate through the website. Out of these, the cookies that are categorized as necessary are stored on your browser as they are essential for the working of basic functionalities of the website. We also use third-party cookies that help us analyze and understand how you use this website. These cookies will be stored in your browser only with your consent. You also have the option to opt-out of these cookies. But opting out of some of these cookies may affect your browsing experience.
Necessary Always Enabled
Necessary cookies are absolutely essential for the website to function properly. These cookies ensure basic functionalities and security features of the website, anonymously.
Functional
Functional cookies help to perform certain functionalities like sharing the content of the website on social media platforms, collect feedbacks, and other third-party features.
Performance
Performance cookies are used to understand and analyze the key performance indexes of the website which helps in delivering a better user experience for the visitors.
Analytics
Analytical cookies are used to understand how visitors interact with the website. These cookies help provide information on metrics the number of visitors, bounce rate, traffic source, etc.
Advertisement
Advertisement cookies are used to provide visitors with relevant ads and marketing campaigns. These cookies track visitors across websites and collect information to provide customized ads.
Others
Other uncategorized cookies are those that are being analyzed and have not been classified into a category as yet.
SAVE & ACCEPT

Enter Your Details For a Free Callback